Throughout most of my growing up, my dad was (still is) very involved in politics. Because of this, my parents hosted and attended many, many events to which I was usually (hesitantly) brought along. I don’t remember much about the boring politics or fancy people, but I remember the food. Of course I remember the food. In all their early 90’s glory, pinwheel sandwiches were often the staple of the party buffet spreads I loved to secretly pick at when the grownups weren’t paying attention. They were my favorite. Fun to look at, fun to eat, and deliciously filled with a variety of wonderful things. You don’t see them much anymore, as they have gone the way of the hot lava cake and shrimp cocktail. It’s so sad when these gems fall out of culinary fashion, and I for one am going to fight for the pinwheel sandwich. They’re just so delicious, so easy to customize, and perfect for a picnic, snack, quick lunch, or yes, even party buffet.

This is the version I make most often, and it really is just simply delicious.

1/2 c. whipped cream cheese *Note: Be sure to get the whipped version. This makes the spreading so much easier

1/4 c. pepperoncinis, sliced and dried on a paper towel

salt and pepper to taste

In a small bowl, mix cream cheese and pesto until well combined

Spread cream cheese mixture evenly over tortilla in an even layer

Place spinach leaves over cream cheese mixture in even layer

Top with pepperoncinis and artichoke hearts

Season with salt and pepper

Top pepperoncini and artichoke layer with an even layer of salami

Roll tightly, then wrap roll in plastic wrap (as tightly as possible) and refrigerate for at least an hour 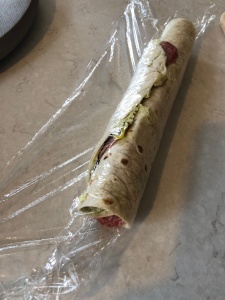 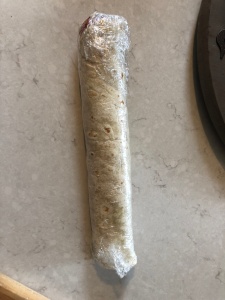 After refrigerating, carefully unwrap and slice into 3/4 ” pieces 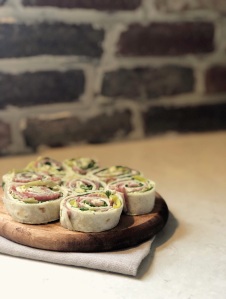 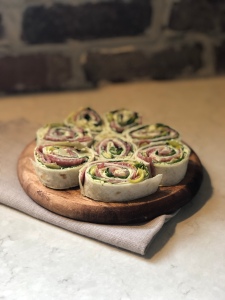