Few foods are as comforting and delicious to me as pot roast with mashed potatoes. While it is an old fashioned dish, it has always been a favorite of mine on cold, rainy, wintery days. Nothing warms the body and soul quite like it, and that feeling is timeless.

I know that the Instant Pot is having its time in the sun at the moment, and while I don’t own one, I do love our pressure cooker (which does essentially the same thing). This recipe will work just as well in your Instant Pot or pressure cooker, with time and temperature modified to fit your specific appliance. If you do have time to make this in your slow cooker, though, I recommend doing so. There’s just something about the smell of this cooking all day, filling your house with its warm, spicy scents that feels like a giant hug all day long.

1 c. red wine (I like to use whatever I’ll be drinking with the meal. A bold red, such as a Cabernet, works well)

Juice from 1/2 a lemon, to be added later

Roux (to be added to roast broth to make gravy):

Combine all of the roast ingredients, except for the roast itself, the peas and the lemon juice in your slow cooker, stir to combine. You will have more liquid than you may be used to with a pot roast. That’s good, it’s going to be gravy later. Mmmmm….gravy…

Generously season both sides of the roast with salt and pepper, then nestle it into the rest of the ingredients

Pop the lid on and cook for 4-6 hours on High, or 6-8 hours on Low. Cook time will vary based on your slow cooker. Just keep an eye on it. When it’s falling apart and no longer chewy, you’re all set.

*Note: Whenever I use my slow cooker, I like to use a slow cooker liner for easier cleanup when the time comes. You’ll see it in many of the below photos. 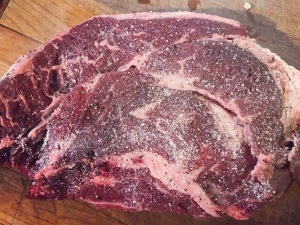 About 30 minutes before you’re ready to serve, you can make the mashed potatoes. This is also when you’ll want to add the frozen peas to the slow cooker. No need to thaw those babies, just toss them right in.

Peel and dice the potatoes into roughly 1″ pieces, then put them into a pot of cold, salted water

Cook the potatoes on medium/high heat until they fall apart when you pierce them with a fork. Drain into a colander and return them to the warm pot.

To the potatoes, add the butter and milk. I like to cut the butter into cubes as it will melt more easily. The amount of milk you use will depend on your potatoes, but should be between 1/4 c. and 1/2 c.

As I’ve already mentioned, this is an old-fashioned dish, and I prefer an old-fashioned method of mashing. The extra bit of exercise also totally cancels out the calories in the amazingly buttery potatoes you’re about to eat. Well, maybe a little bit? But feel free to use a handheld mixer if that’s your style. 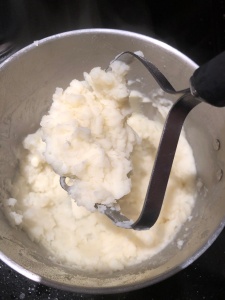 Season the potatoes with salt, then cover and set aside.

Now is when you’ll make the gravy. You’ll want to separate the solids in your slow cooker from the broth, and transfer the broth into a saucepan on the stove. I like to put the meat and vegetables into a glass bowl. No need to cover and keep warm as they will soon be drowning in piping hot gravy. 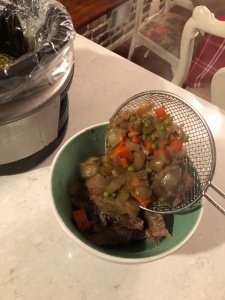 With the broth warming on medium heat, make a roux.

Ok, for some reason people get very intimidated by roux, and I’m not quite sure why. Friends, I am here to calm any roux fears you may have. It really is the simplest thing to do, and such a useful cooking tool that you can use in countless dishes. Ready to see how easy it is?

First, on low-medium low heat, melt your cubed butter. I cube the butter here again because it will melt more quickly and more evenly.

Once the butter is melted, whisk in the flour until you have a paste. Know what that paste is? It’s roux. Congratulations.

Cook the roux for just about a minute, whisking around the pan, to get the raw flour taste out, then remove from heat and set aside 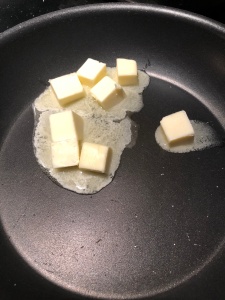 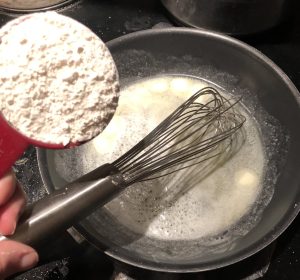 To your saucepan of broth, whisk in the roux about a tablespoon at a time until it reaches the thickness you prefer. I ended up using a bit more than half, but this is totally up to you and your personal preference. Squeeze the lemon juice into your gravy, whisk, and remove from heat

Return the roast and vegetables to the still warm crock pot, pour in gravy, and stir gently to combine 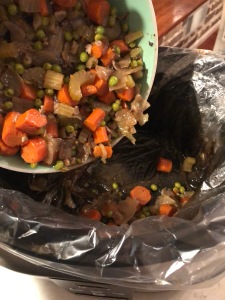 Serve with mashed potatoes, a glass of wine, and enjoy! 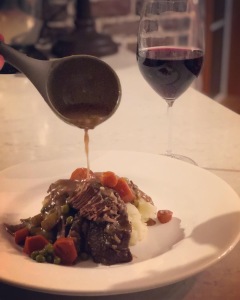